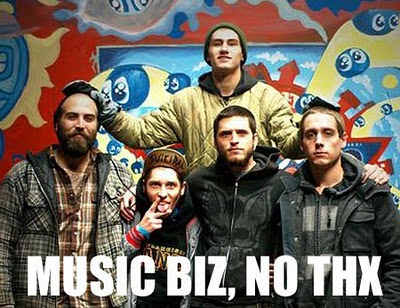 But the premise of technology being the great democratizer and allowing more artists to break through than before — actually, we’ve seen the opposite effect. Fewer artists are breaking than ever before, and fewer artists who are doing it themselves are breaking through than ever before. Back in the early ’80s, when the cellphone was first invented, there were more artists breaking on their own, with no technology, than they are now, with technology. Why is that the case? And what can change to open the gates again, to allow artists to break through, whether on their own or with help?
There were only 225 rookie artists in 2008, and less last year, that broke 10,000 albums for the first time — not that that’s the only arbiter of success, but it’s one of them. That year, there were only 10 new artists that broke through by doing it themselves. If you can’t sell 10,000 albums in digital and physical combined, you’re still relatively obscure.
And social networks have been a really big disappointment in terms of moving the needle in either exposure or sales in any meaningful way. There are a lot of myths in technology that everybody wants to believe, because everybody wants things to get better.
(...)
80 percent of all records released are just noise — hobbyists.
(...)
In January, right before the LA New Music Seminar, I talked to Chris Muratore from Nielsen/SoundScan, and I asked how many releases there were in 2009. He said labels and distributors had projected about 132,000. Later, SoundScan said 97,000 had actually sold. So it’s possible that around 35,000 releases didn’t even sell one copy last year. That means not even the artist or their mother bought a copy, and all those artists are out there gigging, they’re all on social networks, they’re all doing stuff to clutter the marketplace.

Wired.com: So is that what you view as the solution to this? Just emphasizing quality and not really trying to do marketing anymore?
Silverman: No, I think you have to be out there. You have to spread the word to get exposure, but I think the problem is context. When you’re in a glutted environment, you need to differentiate yourself more than ever, so you need a great story. Story is context; it’s not content. The songs on Susan Boyle’s record are forgettable, and her performance is just okay. There are a million singers who can sing that well at least. It’s just the story that sold it. If people could learn from her, regardless of what kind of music they did — “How can I make my story so that when people hear it, they have to spread the word?” That would activate the medium more effectively than trying to get another 50,000 followers on Twitter, which doesn’t seem to do much at all.
Meanwhile, we’re not thinking about music. The whole industry is thinking, “How do I keep up with technology?” when in the old days, we used to focus on “What’s the coolest sounding music?” and invest in that — something cool breaking out of somewhere nobody ever looked before. We’d look under a rock, and say “Wow, this group is pretty cool, let’s try it.” We’d be wrong nine times out of ten, but one time out of 100, we could be, like, really right, and come up with something like The Ramones, who would end up becoming important or relevant, if not profitable.

There are two ways to do it, and you have to do both. You have to reduce the risk and increase the reward. The model that looks most promising is to set up an LLC, just like a movie company — they set up an LLC for each movie. Every artist is a business, and has its own corporation under this model, and all of that artist’s creative equity goes into that — not just music, but everything they do. Whether it’s live, or merch, or whatever, their brand goes in there. And the investors who are investing and trying to promote on the other side — they own half. So it’s more like a business. An equity partnership.
The good thing about it is, the artist and label-slash-investor are on the same side of the table. As long as they want to maximize profitability, nobody makes money unless everybody makes money. In that respect, you can’t fuck an artist, because you fuck yourself.

Posted by: wfolta | 07/11/10 | 10:27 am |
Good idea! The music industry’s legendary corruption and greed is doing it in, not file sharing.
One suggestion, though: don’t even mention the movie industry, as you did. They are as corrupt as the record industry and “Hollywood Accounting” is going to burn them in the next decade.
Posted by: fuzzynormal | 07/11/10 | 9:26 pm |
How will recording executives afford to maintain their cocaine habits without the benefit of exploiting artists?
Posted by: Cartoonoholic | 07/12/10 | 4:28 am |
This is easy. The problem with record labels is that WE DONT NEED THEM ANY MORE.
Posted by: khaullen | 07/9/10 | 10:24 pm |
“80 percent of all records released are just noise — hobbyists. Some companies like TuneCore are betting on the long tail because they get the same $10 whether you sell one copy or 10,000. Who uses Photobucket and Flickr? Not professional photographers — those are hobbyists, and those are the people who are using TuneCore and iTunes to clutter the music environment with crap, so that the artists who really are pretty good have more trouble breaking through than they ever did before.”
What a fucking snob. Music industry elitists like Tom Silverman profit off the illusion that there’s a fundamental difference between professional musicians and “hobbyists”. It’s this disparity between superstars and nobodies that has historically fueled their entire business, and they’re now using it to prop up their dying industry. It’s only by maintaining this inequality so that they can survive in an age of limitless choice, and they do it by jamming Justin Bieber down our throats, collecting on the artificial buzz they create, then complaining that they’re not making as much money as they used to.
Back when it was prohibitively expensive to record and distribute music, the labels fulfilled a real need and their venture capitalist approach to recruit and promote musical talent arose organically. Now that the cost to record high quality music has dropped to well within reach of just about anyone and worldwide distribution is as easy as uploading to YouTube, the music industry is clinging to the shreds of the absolute power they once had by artificially pumping up their chosen musical acts. By pretending that they alone are qualified to separate the “professionals” from the “hobbyists”, they deceive the public into believing they’re still relevant.
The truth is there’s a sliding scale of musical talent, and even if Bieber sells 1000x more albums than some indie garage band, he’s sure as hell not 1000x more talented. If American Idol and YouTube have taught us anything, it’s that we can choose for ourselves which musicians we like, and that we don’t need the record labels to choose for us. Mark my words: music will not die when the music industry dies.