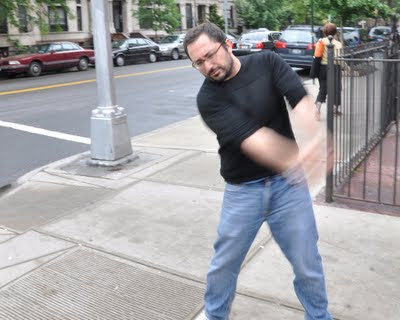 Gigaputt: Avenues become fairways and a series of local bars are transformed into greens as New York turns into a giant 18-hole golf course and iPhones turn into golf clubs. Players swing their iPhone to take a shot and then examine a map on the phone to find their “ball” and continue through the course.
The Urban Disorientation Game: Players are challenged to find their way back to the Conflux headquarters after being blindfolded and driven to remote parts of the city. Players will be asked to create maps and explore their surroundings as they make their way back to the starting point.
Fish ‘n microChips: As part of an effort to spark public interest in New York’s waterways, a New York University professor, Natalie Jeremijenko, installed an array of LEDs and floating buoys at a site on the East River. The buoys have sensors to monitor water quality, temperature and activate the lights when fish swim by.
Waterpod: The photographer and sculptor Mary Mattingly’s 3,000-square-foot self-sustaining, solar-powered, floating living space and art barge will be on display and open for tours to help facilitate a discussion about living in a future where resources are increasingly scarce and eco-friendly habitats are a necessity.
Human Scale Chess Game: While two chess masters play an actual game of chess, each move will be mimicked by human players posing as knights, rooks and bishops. The photojournalist Sharilyn Neidhardt has mapped out an eight-block-by-eight-block section of the city, with each intersection representing a square on the chessboard. As the chess masters complete their moves, 32 volunteers equipped with cellphones and maps will move around to reflect the location of the pieces in the game.
IPhone Drum Circle: Mike Koller hopes to create the “First, Possibly Only and Probably Last” iPhone drum circle in Brooklyn this weekend. The artist invites anyone with an iPhone to download a drumkit application and join him in an impromptu musical session. Mr. Koller plans to have amplifiers in place for participants to plug their phones into and play.